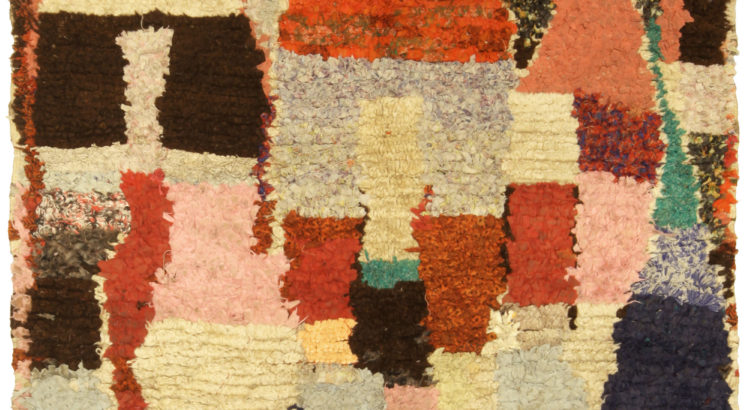 We find ourselves face to face with the necessity of more careful, examination of patterns and designs in rugs, as some knowledge of these subjects is absolutely necessary before we are fully equipped to subdivide the five great classes and proceed with our analytical study.

Our avowed method is to deal with what we see, and through it to be led back to that which anteceded it, basing pattern upon symbol, and- symbol upon human thought, instead of trying to find in pattern something to fit a preconceived notion, or to-illustrate some thought to which it bears no possible relation.

The patterns on rugs are to be studied after methods and materials have been thoroughly investigated, and the advice which all collectors should heed as they approach the study of design is to ” make haste very slowly,” avoiding all effort to force the eye to see what does not exist, and to twist the designs of adventition into those that show deliberate intention.

There are certain well-known divisions into which historic pattern has been apportioned, and these first attract our notice.

In the rug-chart we have crowned the side columns with “applied thought,” and upon the accumulated thought of the ages we find that that which we call ” ornament ” is alone left us of all the mental activity of days that are past. To handle ornament carefully and correctly is an art in itself, and only after studying its principles should we consider its revelations. It is possible to be absolute about a few things, and it is far better to hold to them than to be confused in the mind over many things.

Ornament is decoration that has evolved from patterns that were based on symbols used by primitive peoples to express thought. The signs stood for ideas, which, interpreted by one generation after another, finally dropped away, the more or less well copied signs remaining. Being altered first by one weaver and then another, pattern resulted, and the pattern has become ornament, and as such is taught in our schools where design is applied to all sorts of materials under the name of ” historic ornament.”

All ornament may be separated into three main divisions,—geometric, naturalistic, and conventional. Geometric ornament is naturally the first to reveal itself to the weaver, because of the nature of the materials used. The earliest patterns are always due to the limitations of the weaver, who must confine himself to the opportunities afforded by warp and woof, which restrict him to rectilinear designs.

Curves and circles are of later development, and show the ability of the weaver to overcome difficulties. Naturalistic ornament shows that the weaver was a thinker as well, and, no matter how rude the copy of flower, leaf, or bird, thought may be traced in all attempts to represent objects. Conventional ornament may be looked upon as an arranging of motifs to suit the needs and fancy of the designer.

These three great divisions of ornament may each be divided into other three—ornament of adventition, ornament of construction, and functional ornament. When, without any forethought, the dropping of a stitch revealed to the ancient Egyptian that it was not absolutely necessary to make a plain, regular weave, but that, by skipping some threads of the warp in running in the woof, an irregular diagonal effect would result, this accidental discovery, simple as it now seems to look back upon, gave the name ” Alexandrine weave ” to irregular arrangements of warp and woof, and produced a pattern of adventition.

Constructional ornament owes its development to the fact that oftentimes old methods of manufacture survive in pattern after they are no longer used. A weaver, for instance, makes a mat of thick ropes which he ties together with fibre of any kind. A surface pattern is the result. Later on, when, some other method being employed to make floor covering, there is no longer need of the primitive process, the surface pattern is copied simply because it is considered ornamental.

Functional ornament is perhaps, of the three, the most indicative of absence of thought in the interpretation of design ; the weaver or craftsman adding for ornament something that once stood for use, and which has become meaningless, having lost all semblance of the thought and need which called it into existence for a purpose.

It will very soon become evident that that which we have already formulated and for convenience have called by names of our own selection is none other than historic ornament arbitrarily classified, and our thought lends itself to methodical arrangement in a way other than it could had we not already made independent discoveries.

Our Oriental friends would hardly understand the nomenclature that we have adopted, for ” historic ornament ” is the name given by students to that which in the East is much more simply defined as ” tribal pattern.” When a pattern has been copied by one generation after another, it becomes ” classic,” and the original ideograph or symbol which antedates the pattern is known as ” archaic.”

Tribal patterns are used on both coarse and fine rugs. The chief, or ruler, among nomad weavers, or the monarch of more civilized people, may order rugs made of the very finest materials possible, or such may be ordered as “tribute-rugs,” and all these will have significant time-honoured tribal patterns.

The weaver who for his ruler makes this costly rug may at the same time weave a coarse rug for his own private use of the same tribal pattern. Again, as nomad weavers migrate and settle in towns and villages they learn to use materials in a less crude way, so that we find tribal patterns in rugs in which the materials vary.

Tribal patterns originally served to denote ownership, and even now are used in remote places for the same purpose, fidelity to the traditional pattern being considered a distinctive virtue. Such designs are handed down from one generation to another by aged weavers, who draw in the sand the well-remembered details for younger workers to copy.

Fragments of old rugs are treasured by those who possess them, and are laid aside to serve as samples for reproduction. There is almost pathetic reverence among Orientals for genuinely antique specimens of celebrated weavings, and an effort is being made by many modern commercial houses to have these old styles reproduced rather than have the’ Market flooded with European designs.