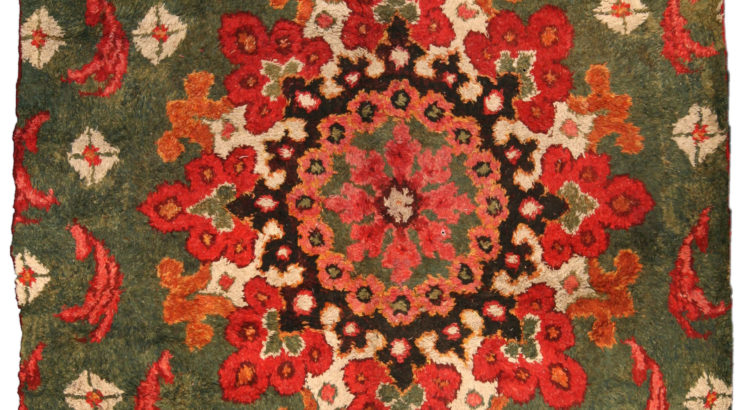 Primitive people, in whatever part of the
world they have dwelt, have used the same natural materials in rug-manufacture,
vegetable always antedating animal products, and the list may be framed
as follows:

These materials, in the hands of the savage
races, have been similarly treated. Matting together leaves, hair, fur,
etc. ; weaving reeds and grasses ; and tying twigs and branches, have
given three methods of making rude floor-coverings. Evolving from these
three simple, natural methods we have felt rugs, used in the Orient to
cover the floors before spreading down coarser rugs ; weaving of all sorts
where woof is run through warp to make fabric ; and, from the tying together
so as to hold in place one material by some other, we trace that which,
in its fullest development, we call lace.

Thus we see that to individuals alike, wherever
they may have dwelt, have come hints and revelations from the great world
of Nature.
The Oriental weaver doubtless made his reed mat before he wove his woollen
rug. His first woven rug, like the first textiles of all people alike,
was without doubt, like the khilims of to-day and the Navajo blankets
we so highly esteem. It was a later thought to add ornament of any kind,
making a relief surface, whether the decoration be applied with feathers,
shells, or knots.

The materials used for the fully developed
art are silk, the wool of sheep, and the hair of goats and camels. It
makes all the difference in the world how these materials are treated.
Wool may be lustrous or dull according to whether or not it is carefully
prepared. When shorn from living sheep in good condition it is apt to
have life and a quality which lends sheen to the spun wool.

If the wool is taken from a dead sheep or
fleece, it may lack lustre and vitality,— or at least so says tradition.
Camels from cold climates shed their hair when they reach warmer places,
and this hair is often utilized, but does not give as good results as
when deliberately removed from the animal.

Pasturage influences the nature of the materials
animals yield to rug-makers, and in studying tribal wanderings we find
that direction is determined by the nature of the country. High altitudes
produce very different wool and hair from low levels, and all these things
must be considered by the student.

The general name for all the rugs with tufted
surfaces or nap, made in the Orient, is ” knot carpet,” the
effect being produced by tying knots of coloured wool, hair, or silk upon
one or more of the warp threads, and then fixing all in place by bringing
down with a comb several threads of the woof.

Here is where a small amount of knowledge
is of immense value to the collector. We hold a rug in our hands,—an
object to study. We notice how many knots are tied in each square inch
of surface,—thirty, forty-nine, one hundred, or whatever the number
may be. Rug connoisseurs tell us how the fineness of rugs depends upon
the quality of the materials used, the number of stitches to the inch,
and how uncommon it now is to find as well-made articles as formerly.

This leads us to consider the relative merits
of the objects themselves, and we may pick up any Oriental rug we possess
and, looking at its fringe, may note if it is of wool, hair, or cotton.
Satisfying ourselves in regard to this, we shall then know of what the
warp of the rug is made. We may cut off a thread of the fringe, if in
doubt, burn it, and, when trained to distinguish the difference between
the odour of burning wool and burning cotton, can determine absolutely
whether it be cotton or not.

Examination of the woof by separating the
tufts and noting how many threads are run through the warp to hold the
knots in place will show whether the woof itself is made of wool, hair,
or cotton. Sometimes two strands will be of cotton and one of wool twisted
together, as is often the case in modern rugs.

Now if the rug was meant to be an all-wool
rug the presence of cotton would show an attempt to cheapen the article.
If, however, the warp or woof were intentionally of cotton, we are able
at once to locate it more or less absolutely, as certain rug-weavers invariably
use cotton for warp threads. The finest and most beautiful Persian rugs
are made on a cotton warp, as their frankly confessed white cotton fringe
will testify.

The next step in the procedure is to note
how many knots there are in a square inch of this special rug, and whether
the ends of the knots are long or short; whether they lie down over the
woof threads, or stand up close together, making a surface like velvet.

Remembering other rugs, and comparing each
new example with all others, will very quickly put one in possession of
many independent theories. Individual taste may prefer a coarse rug, choosing
it rather than a fine one ; but a coarse rug should he known as such,
and the reasons for its excellence should be accounted for. We never look
for many stitches to the square inch in a rug whose chief charm consists
of the fact that it is heavy and warm.

In such cases the wool has been loosely spun,
making a coarse warp, upon which are tied loosely woven threads in big
knots, giving it a high nap which so overlaps the warp threads that the
sides of the knot-ends fall over the woof threads and overlap each other,
quite unlike the rugs where warp threads are tightly twisted and of superlatively
fine material, upon which just as many knots have been tied as can possibly
be crowded, and the upright ends then clipped close, so as to make an
even pile.

Some silk rugs are so fine that many hundred
stitches or knots are crowded into a square inch, and finely spun wool
and hair can be treated so as to occupy as little room as silk. Rare old
camel’s-hair rugs were made with a far greater number of stitches or knots
to the square inch than others made to-day of the same materials prepared
in a different way.

We must consider materials always, when judging
of the comparative merits of rugs. It holds to reason that closely woven
rugs will wear better than those loosely made, and that a fine, even warp,
so tightly pressed together as to keep each knot-end erect, will make
a more velvet-like surface than when long ends are left in shaggy fashion.We
may prefer the long warp to the short, but that is another matter.

The natural desire to ornament plain surfaces
brought about an attempt to apply decoration of one kind and another upon
a woven material. A plain fabric once made, a free-hand sort of decoration
could easily be applied with paint. Later, crude methods of printing and
stencilling were adopted in the ornamentation of tent-cloth and other
woven fabrics, such becoming highly ornate and proving a successful way
of perpetuating symbolic interpretation of current thoughts.

To weave in pattern was not as easy as to
apply decoration. Therefore the early attempts thus to produce satisfactory
results show many slips that eventually became patterns of adventition,
and, though at first accidentally produced, such became finally historic
and immensely significant. The check, the stripe, and many other patterns
were discovered by one and another weaver independently.

Tufts were originally made on woven fabrics
by tying on various things,—grasses, feathers, beads, shells, etc.,—and
by embroidering or applying decorations. These early and primitive means
of producing relief surfaces gave afterward to the new method of tying
in knots of wool, patterns that imitated materials formerly used, so that
in very ancient specimens we find feather mosaic work reproduced, and
coloured beads and shells copied in designs worked out in wool.

Patchwork in which the bits of cloth were
sewn upon a plain woven material, so as to tell a story or to illustrate
a legend, has been called by some Orientals “Thought-work,”
and that made by Armenian women and native Syrian workers so appealed
to Botticelli that he is said to have introduced the idea into Italy,
and to have made use of the style for church decoration. The name “Opus
Consuetum” was given to this cut-work, in which one material was
decorated by another imposed upon it.

The steps from the most primitive methods
to the tying in of knots of coloured wools upon threads of warp were taken
in due time, first one and then another style obtaining, and the knot
carpet marks the highest development of the weaver’s art.